The Art of Respect

My book is a paintographic essay. Intricate in its presentation, subliminal in its meaning and with a philosophy in the art of my art.

The concept for the book began as an inspirational ideal caused by the dismissive reactions and prejudgements of brush strokes not created by coloured mud on cloth. The evolution of the conceptual design of the book matured into a three-part study that I have presented through a series of sequential unique paintographs. 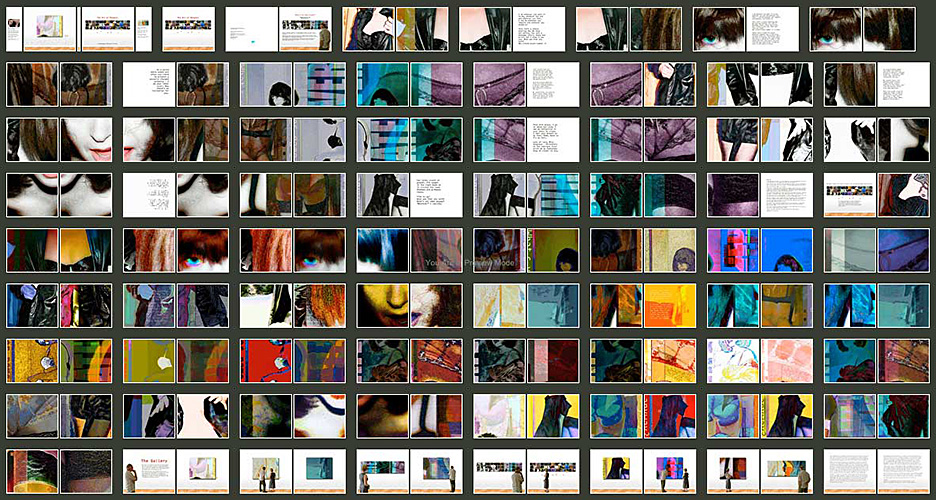 The whole is equal to the sum of its parts – but can a part be greater than the whole?

The concept challenge is to use the composition of an individual piece as a basis upon which a paintograph is created. The paintographic image can have its own self worth and be greater than the whole compilation of 39 individual sections. 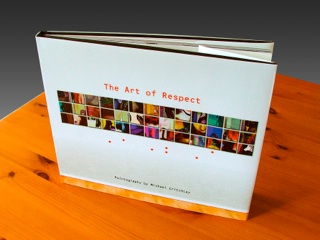 The book was designed, written and printed in 2007.

Representational in its content as a book is the loss of respect, the disrespect, the lack of respect that I have used with an artistic twist to create another ideology.  This ideology has a need for digital art to be recognised. I demonstrate that paintography is to be the bridge linking art of the 21st century, through printing technology, with traditional conventional art and photographic art. This modern descriptive word ‘Paintography’ is so new it’s not in the dictionary yet. In the American Oxford Dictionary Edition 2, the definition of art lists 59 categories of Art Techniques and Media but not one mention of digital computer art. With all due respect, there has to be a breakthrough.

Symbolism is used in a variety of forms to make my point blatantly clear. From the very first pages the reader will identify with this meaning because a prejudgement will already have been made.

Prejudgements and dismissive reactions to digital art considered worthy of respect are often due to a lack of adequate information. This book and the images contained in its pictorial essay is a determined effort on my part to validate the art of paintography.

The images themselves are provocative, or are they? Has a prejudgement been made already, resulting in lack of respect and loss of respect for the fictional character which intonates a slurred reputation immediately. The use of text, a segment of a story line, fuels the imagination, yet what was actually said?

I am whatever you want it to be, whatever you see and whatever you feel. I can be whatever you imagine and whatever you dream of.
This isn’t a chance meeting. No. We have met before. You left a message. Short, sharp and brief, but I knew it was you. What was that you said?
OK. Little black number it is then.
There isn’t any need for words. Whatever happens now is the total release from your limitations and I am here to indulge your every mood and whim. I smile as I take in the scene and feel the stare. You are staring now. Searching, trying to take in the whole picture.
In a world where women are often too timid to project a sexually charged presence – I am your ideal lover. 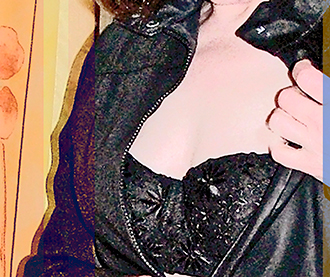 Now there’s an invitation for you.
My jacket? Sure, it’s getting warm in here. Zipper noise. Slowly falling to the floor, just like the movies. Slick silk tops and lace.
Pale skin glows. I go to speak but stop. So close, I feel your breath on my face. I see my reflection in your eyes. Hmmm. Need to fix my hair.
Lots of lace Miss Disgrace. Stilettos on the laminate floor click as my footsteps draw me closer to you.
I retreat slowly and turn around. If only I could reach it.
Too high, but I try. I hear you moving behind me.
Just a look, just a touch. You dim the light.
Car tyres crunch on gravel. I’m caught in the light beam as it circles the room. Shadows and glimpses tease.
Time to go. What was that you said? “What’s yer name anyway?”
“Whatever I replied. 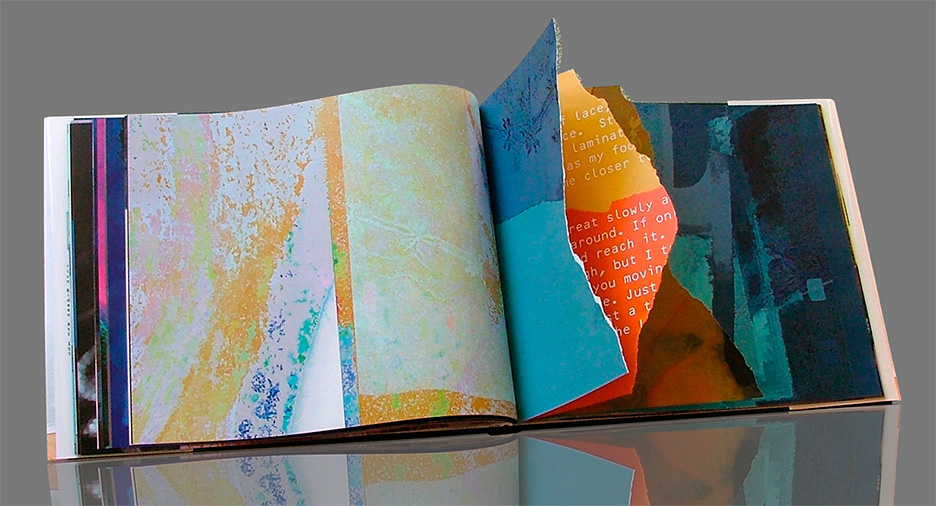 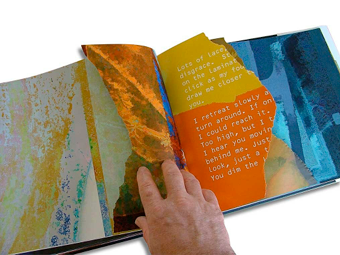 Disrespect is symbolically portrayed throughout Parts 1 and 2. It is only by the tangible and interactive participation of the reader that a connection is made.

Initially my idea was to involve the reader in the ‘ripping’, for the reader to create their own ‘Art’ as the layered pages revealed the not so random images, not only on the facing page but on turning the page a modified previous image appears. If you enjoy a bit of intrigue and an unknown outcome, this is for you. Alternatively, any book ordered directly through me would be personalized with the rips in place, and each copy of the book is a unique Art Book signed by me.

Until you turn the pages the following explanation may be obscure as the reader will be unaware of the vandalism within. Ripped pages, defacement of pages, scribbled notes, marks, crumpled and mended pages. What has been your reaction if, on having a borrowed book returned, or a book on loan from the library, it was subjected to any of the afore mentioned? Annoyance, irritation and sadness at finding such a lack of respect for the book not to mention the loss of continuity, meaningless sentence structure, or conclusions left undone.

Then I thought, ‘Can disrespect become respect?’ Review the changes of the not so random overlapping ripped sections. What once was disrespectful has now deliberately become part of the image and adds even more to the composition. This vandalism can be admired and given value as respectable art. 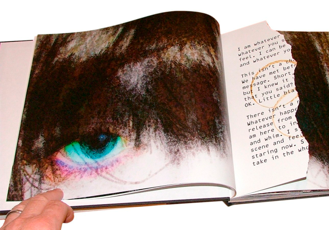 Here you can see a ripped page with T-cup stains.

The art of my paintographs is all about digital texturisation, shape and colour. Abstracting new images from a part of a whole image is so creatively liberating and fascinating. The not so random overlapping pages have been meticulously placed in such a way that a wider appreciation of extending the image can be seen in a completely different frame.

This book entered in the 2007 SCU Artists’ Book Award won the award and is show-cased in the library of the Southern Cross University of NSW, Australia. The brief for all artists was to produce a book that in itself was ‘The Art’ not descriptively about art or a specific artist.

Fuelled by my passion about my art which had been disrespected, degraded and even expelled from exhibiting at Art Shows as there was no ‘formal’ category for it to be judged, was all the motivation I needed to uphold my belief that Paintography has its own rightful place in the art world and that it cannot be catagorised alongside the purist photographic art. Neither can it be a substitute for traditional or contemporary art. 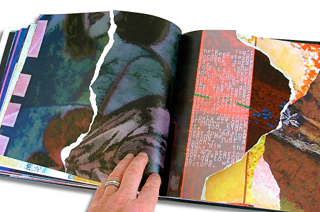 My Paintography appeared to be a threat to the art purists who had little or no understanding about digital art and its creation. My work was printed on canvas and highly commended at the Oceania Exhibition in Queensland by Steve Parish (Steve Parish Publishing) who publicly announced that digital art such as mine was the link between painting and photography.

Photo manipulation is too vague a description for the art of Paintography. I believe this term undervalues the creativity, the imaginative exploration and the technical knowledge that is fundamental to digital artists who choose to use this medium of the 21st century. 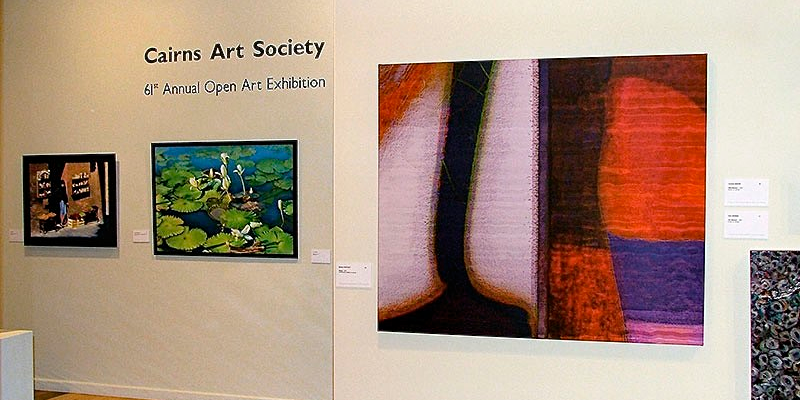 Part 3 of the book – The Gallery – demonstrates the visual impact of the paintographs exhibited. Recognition of acceptance and value has been respectfully earned and the measure of this success stands as a symbol of accreditation – the red dot.

This symbolic red trophy is so sort after and I have observed the public reaction to this red dot against works on display. It is an accent on the judgment that meets with approval and warrants a measure of time and contemplation by the critical eye.

Competition is a healthy exercise, keeps you keen, motivated and up for the challenge. We also hold ourselves open to criticism, rejection, and deflation of our own self-image. Respect has to be earned and when given is well received. To receive it is the value without price.
This book has been a creative journey and is the art in its entirety.

“Success is not measured by the position one has reached in life, rather by the obstacles overcome while trying to succeed.” Booker T. 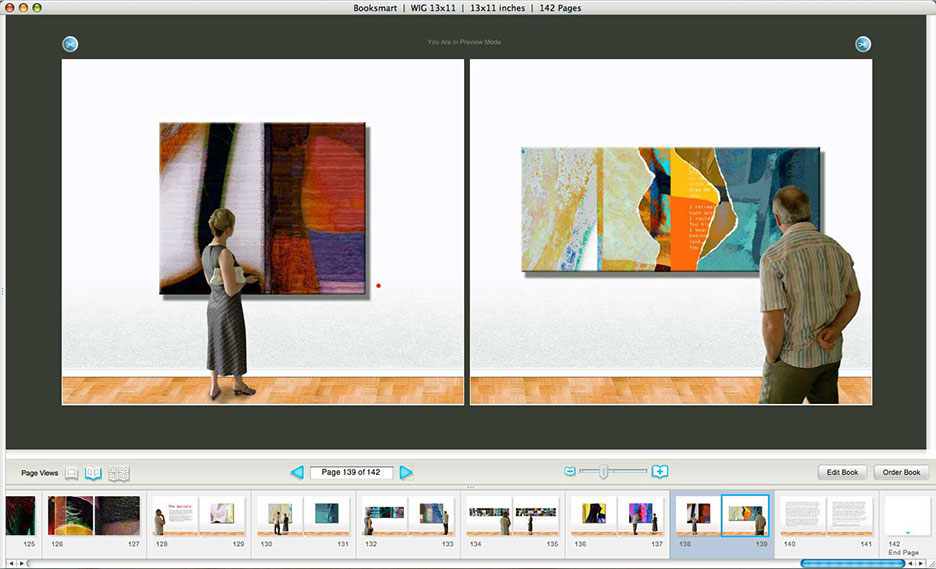 The images from Section 2 of the book can be seen in the menu button Paintography>Respect but may take anything from 15 to 30 seconds to load. I have made  them larger than normal for you to view the detail by clicking the ‘enlarge’ button, positioned top right in the image window.

I have been an art director/graphic designer for over 40 years and using cameras for longer. Now, with those years of experience behind me, making images with the camera – photography and paintography – is what I enjoy most of all.
The Valley

Sorry, the comment form is closed at this time.