An extract from an article by my brother Paul Critchley

Photorealism – The Emperor’s Got No Clothes

…when I saw my first photorealist painting in the early 1970’s I was amazed, I couldn’t believe that what I was looking at was painted, “I want to paint like that!” I declared and tried, but quickly discovered that it required a lot of skill. It still does, and I still admire it – but only the skill, and therein lies the problem. 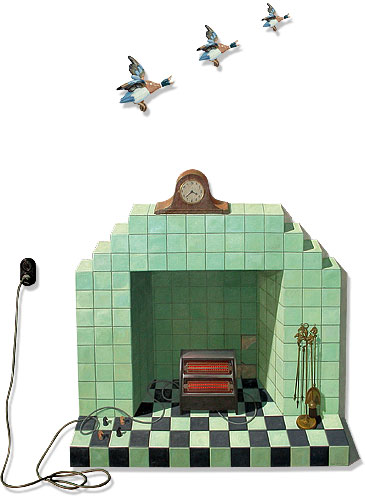 When photography was invented the photographers used to copy the compositions of the painters but then slowly the painters started to imitate the compositions made by the cameras – see some paintings by Degas for example. Whilst painting moved slowly away from depicting realistic scenes via cubism, surrealism etc., to abstraction, photography became the medium to show the real world. People believe a photographic image more than a painted one; you must have heard someone say when looking at a realistic painting “Oh I like that, it looks just like a photo!”. Why do they like it? Because they can understand it, because their understanding is based on the experience of seeing the real world with their own eyes and a photograph looks like what they know. So along comes Photorealism and it is admired because the paintings copy exactly the photos, therefore they are “good”. But what precisely are we admiring? The fact that the painting looks like a photo or what the image tells us? If we’re interested in the image why not just hang the photograph on the wall, why paint it, what more does a photorealistic painting tell us? Answer: The painter has great skill. We are looking at the dexterity of the artist to copy a two dimensional image onto another two dimensional surface … and … and what else? So where’s the rest, where’s the personality, where’s the voice, where’s the imagination, where’s the art and the artist? Where is the imagination to look at the real three dimensional world and convert it into two? That’s the art and the artist is the one who has the imagination, who has the personality and has made the art because they want to say something ie: they have a voice. However, photorealism is just a spectacular show of skill, a tour de force and that’s it. I’ve been painting for more that 30 years and I have come to the conclusion that Photorealism is the dullest of all genres. For me, for it to be art there’s got to be more than just the skill of a copyist.

Interestingly photography as a medium has progressed because computer technology now allows the image to be manipulated; the photographer reacts to something seen in the real world and then adds to the image. So now it’s the photographer who has the personality, the voice, the imagination; the photographer is now creating art and is the artist – not the painter who slavishly copy’s a photograph. If a photorealist were to copy a digitally manipulated photograph which showed purple trees, green rain and children with ten heads what would the reaction be? “Wow, I like that it looks just like a real digitally manipulated photograph” or “Great skill to copy someone else’s weird image, but why bother? I guess it’s because they didn’t have the imagination to create their own”…

He’s got plenty to say and show on his site:  paulcritchley.com

I have been an art director/graphic designer for over 40 years and using cameras for longer. Now, with those years of experience behind me, making images with the camera – photography and paintography – is what I enjoy most of all.
1970’s – Photoshop layers before Photoshop
Surfari Downunder

Sorry, the comment form is closed at this time.

Click here for my most recent photos. Each two months I will add the most recent images and remove one month at the start of the next.